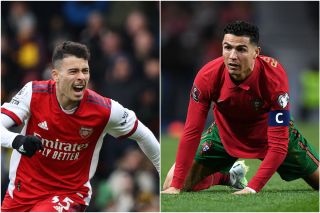 The 20-year-old may have an eye for goal alright, but comparing him to Cristiano Ronaldo, even at the age of 37, is ridiculous to say the least.

Ronaldo is having one of his worst seasons as he reaches the latter stages of his career, but the Manchester United star has still managed 18 goals in all competitions (12 in the Premier League from 24 matches).

However, to give Martinelli some credit, he has kept Emile Smith Rowe out of the Arsenal line-up since December.

On top of that, his performances earned him a call-up to the senior Brazil squad and he recently made his debut under Tite, coming off the bench in a 4-0 win over Chile.

“Gabi has this aim for goal. He likes to attack the space, like Cristiano,” Cedric told The Evening Standard.

“He likes to score goals, like everyone does. But Gabi has this willingness to fight.

“Even when he doesn’t play, he keeps working the same way.

“He is an easy young kid to talk to. You talk and you can see he listens to you. He’s talented, but the way he works is fantastic.”

Arsenal are one of the teams we see as competitors for a place in the top four this season.

After losing 3-0 to Crystal Palace last night, it feels like the false hope surrounding United will drag on, despite the team being unable to go on a real winning run this season.