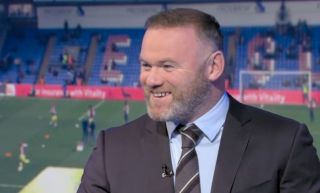 Wayne Rooney believes Liverpool can earn all three points against Manchester City at the Etihad on Sunday.

That’s how he answered a question about who will win the Premier League title this season.

The former Manchester United and Everton striker, who loved scoring against Liverpool and City as a player, could not pick a side he favours to win the league.

Instead he gave his verdict on who will win Sunday’s game – opting for the Scousers to get an away victory, which would boost their bid to win a second title in two years.

“I wish none of them was there to be honest,” Rooney said on Sky Sports.

“But I think it could go either way. Liverpool are on a great run of form, as City are, but I think Liverpool can go there and win.”

The current Derby County manager is a guest on Monday Night Football this week, so the footage below is courtesy of Sky Sports Main Event:

Wayne Rooney has his say on who he thinks will win the Premier League title 👀 pic.twitter.com/W4Nmuj2xOC

Rooney was a proud dad at the weekend when his son Kai scored a wonderful goal against Man City U12.

It would be fantastic to see United take three points from their trip to Anfield later this month, but even the most optimistic Red can’t see that happening.