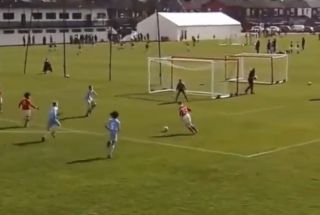 Wayne Rooney scored some brilliant goals against Manchester City down the years and now his son Kai has started doing the same, with a cracking left-footed finish in the U12 Manchester derby.

Wazza, who won five Premier League titles at United, is the all-time highest goalscorer in Manchester derby history with 11 goals to his name. His most memorable goal came at Old Trafford in February 2011 when his overhead kick gave United a 2-1 win over their local rivals.

But the 11-year-old, who signed a Premier League academy registration in December 2020, is trying to follow in his father’s footsteps when it comes to finding the back of the net.

Kai previously bagged a hat-trick and three assists in a 6-3 win over Stoke City, as well as putting four goals past Liverpool.

Kai rooney might become an all time great…not just in footy. pic.twitter.com/jnVHBUjUJW

He scored another impressive goal at the weekend following a superb pass from Tunde Shoretire.

The goalkeeper had no chance!