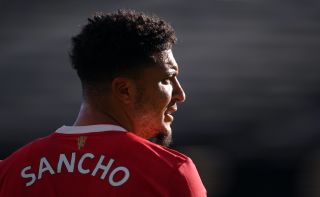 What’s even more impressive is the fact that the players that we are about to list will also be able to showcase their talent during the biggest competition known to football – the World Cup. The 2022 World Cup is set to begin on November 21 in Qatar and will last until December 18. It is set to become the most entertaining and most-watched World Cup of all time and this is good news for the players that we are about to mention as they will have every chance to make a name for themselves.

Now, let’s take a look at the top 5 Manchester United players who will become megastars next season.

Anthony Elanga has been praised by many football experts as the future leader of the Manchester United squad. The 19-year-old Swedish left winger was even recognized by the great Zlatan Ibrahimovic who said that it is very nice to see young Swedish players being in one of the most successful teams in football history.

Football fans are also well-aware of his potential. Some fans are willing to bet on him, literally, Some online bookmakers have reported an increase in bets in which punters are wagering that he will receive the PL Young Player of the Year reward next season.

After all, reputable online bookmakers such as LiveScore Bet are known for featuring tons of bet types and thus, they provide bettors with a lot of flexibility. Not only that, but newcomers can also claim the welcome offer from LiveScore Bet and use it to boost their winnings on the bets.

One thing is certain, everyone is excited to see how Anthony Elanga will progress in the United jersey.

Sancho has been struggling ever since he came to Manchester United, but there’s no denying the fact that this youngster’s potential is unlike anything we’ve seen recently. He only has to find his niche and let the whole world see what types of qualities this young man possesses.

As a fast and explosive winger, Sancho has the potential to be leading the new generation and become one of the top players as soon as next season. We are slowly witnessing the return of the winger football tactic in which wingers are included a lot more in playing strategies and Sancho can be the key to United’s success in this field.

Diogo Dalot is a name that the football world is not yet too familiar with, but the youngster has a lot of potential and if he sets his mind in the right place, he has the potential to become a top-class player. He was loaned to AC Milan in 2020 and returned in 2021 and as things stand right now, he is more than willing to listen and learn.

Thanks to the fact that he has quality players like Ronaldo, the all-time top scorer in professional football, who will teach him and guide him in the right direction, Dalot could be United’s biggest breakthrough next season.

Jimmy Garner is considered by many as one of the academy players that can save United a lot of money in transfer fees. Why? Because his talent is immaculate and if he manages to remain focused, he has what it takes to become a crucial part of the team and help it return to its former glory.

The 21-year-old midfielder is currently developing as he is on a loan in Nottingham Forrest. He first went on loan in 2020 and rejoined the team for a full season in 2021 after he extended his contract with the Red Devils.

The final entry on the list is Hannibal Mejbri who currently plays as an attacking midfielder and as a central midfielder. So far, he’s had 7 appearances in the United jersey and even though he has a long way to go, there’s no denying the fact that he’s shown that he has what it takes to become a superstar.

With hard work and dedication, Mejbri can become a vital part of the team, especially because he plays at a position in which United needs improvement.