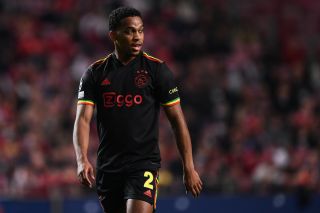 Manchester United’s pursuit of a new manager is well and truly underway and with the current season all but over, it’s believed that talks with potential suitors will be held this week.

Stretty News revealed earlier on Monday that talks with Ajax manager Erik ten Hag has been scheduled for later this week as the club prepares for the second round of negotiations with the Dutchman.

Ten Hag has been heavily linked with a move to the club since Ole Gunnar Solskjaer was sacked in 2021 and with just one year remaining on his deal in Amsterdam, a move to Old Trafford could be on the cards.

Should the managerial switch materialise, there are now suggestions that Ten Hag would be keen to bring talented defender Jurrien Timber with him. The 20-year-old, who is a regular for both club and country, would be one of his first transfer targets at the Theatre of Dreams.

That’s according to Dutch football expert Mike Verweij, who outlined Ten Hag’s interest on De Telegraaf’s Kick Off podcast, as cited by The Metro.

SN’s verdict on Ten Hag’s apparent interest in Timber…
There are questions-marks over several of Manchester United’s central defenders, which could free up space for Timber. Harry Maguire has come under fierce criticism this season, whilst Phil Jones and Eric Bailly are both expected to depart this summer.

Timber ticks all the boxes and although he falls under the category of ‘smaller’ centre-backs, his strides at his young age point towards a promising career.

Timber has three more years remaining on his contract at Ajax but a move abroad could be hard for the youngster to refuse. Manchester United’s good relationship with Ajax officials could also prove to be decisive.