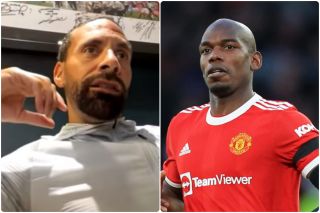 The midfielder, who broke the transfer record when he returned to Old Trafford in 2016, looks set to leave the club for a second time on a free transfer at the end of the season.

Pogba has given no indication whatsoever that he is will sign a new deal at the club, instead flirting with the prospect of making his decision when the current campaign concludes.

There is no doubt in my mind that Pogba has kept United waiting, despite knowing that he wants to leave the club again, so Ferdinand is right when he says they’ve pulled our pants down twice. He is obviously referring Pogba and his agent Mino Raiola.

This had led to constant speculation over his future, amid links to not only Real Madrid but Juventus and Paris Saint-Germain. They are all seen as potential destinations this summer.

But ask most United fans and they will tell you they are fed up with the Frenchman’s inconsistency. Him leaving might actually see the next manager build a proper midfield and it’s been far too long since we’ve had that.

Ferdinand has channeled his anger at United’s hierarchy over the prospect of losing Pogba on a free this summer.

“Business has been done poorly at the club,” Ferdinand told his FIVE YouTube channel, as cited by the Manchester Evening News. “We shouldn’t be allowing players to get down to this stage in their contracts. I don’t think it should happen.

“Economically, to let someone you’ve spent £80m, £90m on, plus wages, leave on a free is absolutely criminal. Twice, it’s likely they’ve pulled our pants down twice.”

Do you think United should have cashed in on Pogba last year? Let us know in the comments section.