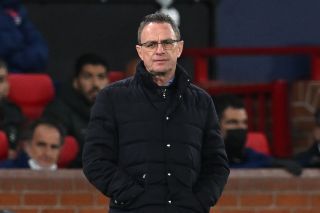 Ralf Rangnick believes that Manchester United could be a credible force again in just two or three transfer windows.

The German watched his side drop more points at the weekend in their 1-1 draw with Leicester City at Old Trafford. That leaves us sixth in the Premier League, falling out of the race for top four.

Arsenal are fourth with two games in hand as well as three more points on the table.

Rangnick says the United squad lacks physicality and the club needs to address the balance of assembling a squad with too many technical players.

He has, therefore, advised the board to recruit players in the next manager’s image.

Erik ten Hag appears to be the top target with a second interview scheduled this week, in London.

Rangnick explains how Manchester City and Liverpool have built teams around their managers rather than star players.

“Both teams of Manchester City and Liverpool – I also watched the Liverpool game today – they also had problems to find their rhythm but in the end, they still won 2-0 quite comfortably,” Rangnick said. “Those two teams have been built together and recruited over a period of five or six years, all of them under the premise of how do the coaches want to play?

“Then we come back to DNA, speed, physicality, tempo, what do we need? This team does not lack technical players, it can do with more physicality.

“It has to be a bit in the DNA of a player, to be honest. It is difficult to change, shall I say a technically great player into a physical, aggressive player, and we have a lot of people who are technical players.

“On a day when we are fluid and in our rhythm, we have shown in the past we can outplay other teams. But today was difficult. Leicester were aggressive and physical in many parts of the game. We had problems with them.

“It is a completely different project (from my previous clubs). Leipzig, we started on level four, Schalke when I came the first time was 17th. We also spoke about that yesterday.

“This is not rocket science. It has to be done and if that happens it does not necessarily need three or four years, maybe two or three transfer windows, then the situation could be different.”

United have not played with a specific style all season, nor have we shown any consistency. It is going to be a huge job for the next manager, but he will need to full support of the board.