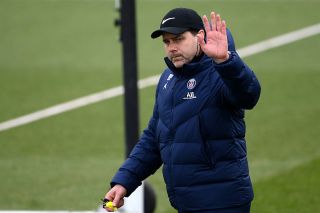 Manchester United are on the hunt for a new permanent manager following the sacking of Ole Gunnar Solskjaer last year, with former Tottenham boss Mauricio Pochettino tipped to be one of the frontrunners for the lucrative position.

Pochettino has been linked with a move to the club since his spell at Tottenham and despite taking up a role in Paris 18 months ago, his future in the French capital is in doubt.

According to some reports in the last week, Pochettino has been said to have taken a meeting with Manchester United executives regarding the vacant position at the Theatre of Dreams.

Despite guiding his side to a 5-1 win over the weekend, Pochettino was met by a hostile reception at Parc des Princes this week, with the club’s supporters making their feelings towards the manager very clear.

The Argentinian has one year remaining on his contract at PSG and discussed his future at the club after the game.

“If it is possible to stay at PSG next season? For the moment, I am not discussing my future with the leaders of the club,” he told Foot Mercato.

“I have one year left on my contract, but it is important to analyse before making a decision and afterwards, of course, we will also respect the decision taken by the club for the future. What will happen will happen.”

SN’s verdict on Pochettino’s potential PSG exit...
A couple of years ago, a large section of the Manchester United support would have jumped at the chance to have Pochettino in charge at Old Trafford.

But it feels like that ship has sailed and unfortunately, there is little to suggest that Pochettino’s trajectory as a manager is going to change anytime soon, despite the 50-year-old working under extremely challenging conditions at his current club.

Erik ten Hag, another manager heavily linked with taking the hot seat at United, seems like a better fit. The Dutchman has improved his side every season and looks to be on the up.