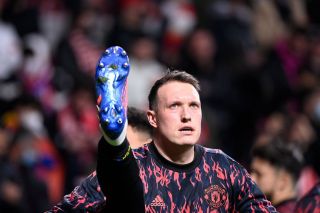 In a recent interview, Manchester United defender Phil Jones appeared to admit he might have to leave Old Trafford in the summer.

Firstly, let me say how great it was to see Jones get a moving ovation when he produced an excellent display on his senior return earlier this season, against Wolves at home.

Everybody connected to Manchester United knows what Jones has been through down the years, so it was fantastic to see him back playing for the Reds, even if he doesn’t have a long-term future at the club.

Now injury-free at 30, it’s definitely time for Jones to move on and enjoy playing football elsewhere. He appears to accept that in a recent interview with The Guardian, saying:

“I’m still only 30 and I’ve missed a lot of football. I’m hoping to recapture some form and enjoy playing football. When I was out injured it was a difficult time but I’ll never give up. I feel like I’m still good enough and I’ve got a lot to give. So I’m hopeful. I’m ready to play again.”

We’ll see what happens in the summer, but Jones is currently nowhere near the starting line-up. United have problems at the back but it is clear that Rangnick does not consider the English defender good enough to be playing ahead of Raphael Varane, Harry Maguire, Victor Lindelof and maybe even Eric Bailly.

Axel Tuanzebe will return from his loan spell at Lazio in the summer, too, and plenty of decisions will be made on players with uncertain futures when the next manager is appointed.

Jones was linked with a move to France in January, but it fell through.

Ligue 1 outfit Bordeaux were believed to be interested until Jones turned them down.