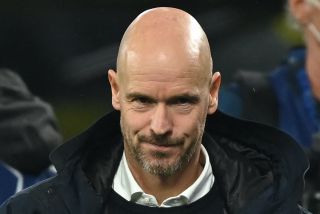 Some of the current players at Manchester United must want to manage the team themselves.

We know that right now, Erik ten Hag is the favoured choice to become the next manager, but the Manchester Evening News claims some players have reservations.

Samuel Luckhurst writes: “The Manchester United dressing room is split over the possible appointment of Erik ten Hag as the club’s next manager.”

Firstly, I’d like to know what these players know about appointing managers? It’s fine to have different opinions but to say the dressing room is split over Ten Hag’s potential appointment is pretty damning.

It is damning on the players themselves rather than Ten Hag because it shows that we have huge problems with morale in the dressing room, and too many players that care only for themselves and not the team.

The article from Luckhurst states that a number of players are excited by the prospect of being coached by Ten Hag, while others say Ten Hag is viewed as an ‘underwhelming’ choice.

Stretty News revealed Ten Hag is set for his second round of talks with United this week, in London, but the Dutchman remains focused on winning another Eredivisie title at Ajax.

I honestly don’t see anything underwhelming about appointing Ten Hag at the end of the season.

And, on a final note, anyone who questions the next manager before he arrives should be shown the door.