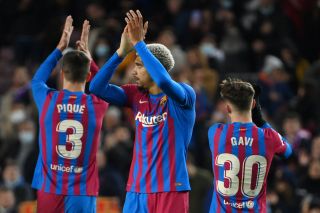 Manchester United are set for yet another busy summer this year and as it was last year, improving the defence will once again be a hot topic.

The Uruguay international is one of Xavi’s most important players at the Catalan club but has failed to commit his long-term future to the club, with a dispute over his contract raising doubts over his stay at the Camp Nou.

Phil Jones and Eric Bailly are both likely to depart Old Trafford this summer, which could force United’s hand in the market. Araujo fits the bill perfectly and according to reports in Spain, the Old Trafford hierarchy is already plotting a huge bid for the defender.

That’s according to Catalan outlet Sport, who claim that United are ‘planning’ to submit a ‘huge transfer offer’ for the 23-year-old, who has been labeled as Barcelona’s best defender.

Araujo’s current deal at Barcelona runs for one more year and should tensions rise in negotiations over a new deal, the upcoming transfer window could prove to be the best time for United to swoop for the rising star.