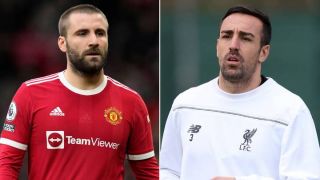 Liverpool FC mouthpiece Jose Enrique could easily be accused on fat-shaming after he insinuated Manchester United left-back Luke Shaw may be “overweight”.

The former Premier League defender felt the need to take to Twitter on Saturday, while United were playing Leicester City, to comment on Shaw’s physique.

Enrique caused debate when he tweeted: “It is just me or does Luke Shaw look over weight?”

Is just me or luke Shaw looks over weight?

He should really know better than to tweet that.

Shaw didn’t look any different when he starred for England at Euro 2020, so it’s a lazy stick to beat him with, and such comments can have a damning effect on someone’s mental health.