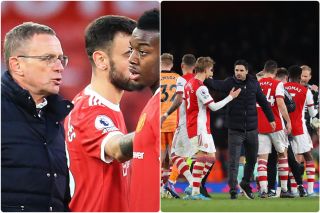 Arsenal have become the clear favourites to finish in the Premier League top four this season following Manchester United’s 1-1 draw with Leicester City on Saturday.

The Gunners are not in action again until Monday night, when they take on Crystal Palace, but they also have two games in hand over United.

Ladbrokes have made Mikel Arteta’s side odds-on favourites priced at 4/9 – albeit behind Chelsea, who should have Champions League football in the bag for next season by finishing third in the league.

Moreover, Tottenham still pose a threat, with odds of 2/1 to finish above their north London rivals.

Manchester United continue to slip up which has left us priced at a lousy 7/1 to secure a Champions League spot for next season.

See the full list of odds below – to finish in the Premier League top four: