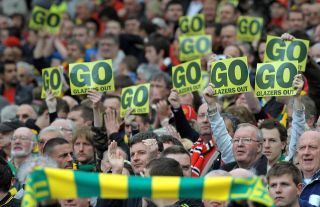 After being kicked out of stadiums due to the pandemic for so long, we returned to watch United play our old rivals Leeds at home for our first game back.

It was to be one of the best days in recent memory as a red inside Old Trafford, as the stadium was quite simply, bouncing. As we stood shoulder to shoulder inside TRA, the noise was deafening, we were back doing what we loved most, following our team, and we proceeded to give Leeds United a lovely welcome back by giving them a proper battering.

The mood was set from the off when United snuck a surprise unveiling of Raphael Varane on the crowd just before kick-off, it buoyed the fans in the stands and the smiles were fixed firmly on faces everywhere as we watched United put on a show.

Next, Newcastle at home for the return of the one and only Cristiano Ronaldo. It became the hottest ticket in town to have yours for this game with fever pitch being reached in the lead up to the day amongst baying fans wanting a piece of the action.

Action was certainly what we got, Newcastle were put to the sword with ease as that boy Ronaldo, returned with aplomb.

My word, a summer of finally signing Jadon Sancho, who had eluded us previously, Raphael Varane a truly world class centre half and the greatest player of all time, Cristiano Ronaldo, had us back to our best and instantly, an arrogance began to form that had been long missed.

United were back, weren’t they?

Fast forward to April and the season is dead in the water, Ole Gunnar Solskjaer has been sacked and replaced by Ralf Rangnick. Anthony Martial has been shipped off on loan, as has Donny van de Beek. Mason Greenwood is not currently with the club due to an ongoing investigation for rape and assault. The team has crumbled to an unrecognisable mess, so much so that we played Leicester this weekend without a striker. We’re none the wiser as to who will be our manager next season and the fans are, quite simply, up in arms.

Where did it all go wrong?

I guess this is the magic question everyone wants the answer to, but the answers are so varyingly different it would take forever and a day to compile them all.

However, one thing we can all agree on, is who is at fault.

The Glazer family who have owned United partially since 2003, but primarily since 2005 when they achieved their massive share purchase, have overseen the ship sinking, so naturally, it’s fair to say it is they who are to blame for this.

We can go through the years and the decisions made until we’re blue in the face, but let’s simply encapsulate it in this;

Continual overspending on vastly overrated players on massively inflated wages has led to a bloated squad of deadwood that we will ply cannot shift, which means we cannot replace them, leading essentially to the lack of a proper rebuild of the squad, which means it is solely patchwork each summer.

Not only has the club seen years of poor investment on the pitch, and very little recouped from sales of outgoing players, we have also seen a merry-go-round of managerial appointments, the latest leaving us with an interim manager as we await with baited breath to find out who is next to take what could be seen to be a poison chalice, as the manager of Manchester United.

The mood is poor overall, morale is low amongst the fans, which can only suggest similar amongst the players and staff at the club. Uncertainty around players futures and uncertainty around the incoming manager leads to unrest and damaging confidence among the squad, players not sure where their future lies, if it’s even with United.

A season where we have once again become also rans, in a race that never quite got started for us.

As football fans, we can accept transitional periods, we’re not naive to the point where we believe we will win the league every single year, we are always bound to have a downturn for a bit before bouncing back from it. But what we have become, is a side who is no nearer to even being part of the conversation of title challengers, never mind actually winning one, than we were the last few years.

Yes, a massive 12 points adrift…we didn’t challenge, nobody did. We didn’t look like actually winning the title, we were simply the best of the bad bunch behind a devastating City side. But, it was a cause for renewed expectancy for this season, something to build upon, and with the signings we had made, why shouldn’t we expect to challenge?

We currently sit 7th place in the league, our cups and European adventures over.

We’re approaching 12 months since the infamous protest which saw the Liverpool game postponed in an angry reaction to the European Super League, but it was more than that, it was built up angst at how our club is ran, at how our owners treat us fans, it was an explosion of many emotions that quite simply had to erupt and erupt it did in magnificent fashion.

We had been heard, the Glazers had been forced to sit up and listen and pay attention after 16 years of silence, Joel Glazer appeared and made promises aplenty, to calm the crowd who wanted blood.

These promises, laughably, haven’t been kept. But who were the bigger fools? Them for lying to us, or us for believing them?

The 12 months anniversary is fast approaching and we have yet to hear a peep on this Fan Share Scheme that was promised, MUST and the club are seemingly locked in behind closed doors discussions but from what anyone can tell, we are no closer to anything successful than before?

The Fan Advisory Board, one could be forgiven for thinking it was set up to be a smokescreen, to pacify people…we have yet to see it achieve anything worth discussing, but it sounds nice, it’s got a fancy name and hey, it must mean the Glazers want to hear from us?

We are on the cusp of a season of gargantuan failure, a lack of Champions League football once again looks realistic and a summer spent on various transfers that will fix us, under a new manager and new ideas.

We’ve been here before, it looks like this revolving door of rebuilds and managers will continue and we will be watching our club circle the drain more and more, until something is done about it.

The fans don’t want to sit at the Glazers’ table and have a cup of tea with them, discussing notions of share schemes they’ll never give or advisory boards they don’t care about.

The fans want action, words are easily told, but action, proven and open action that directly affects the club, it’s progress on the pitch and it is treatment of the fanbase that adores the club through both glory days and dark days.

The fans want us to return to the club we once were, the powerhouse of English football, the mammoth club that was the envy of the world, that players came to play for, because of who we were, not how much they were paid.

The fans want our club back and that is only possible if the Glazers are removed from the ownership of this club.

The fans are right.