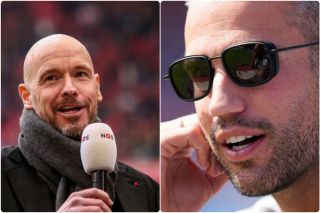 Erik ten Hag has sounded out Robin van Persie about returning to Manchester United as part of his backroom staff, according to reports.

The Ajax manager has been strongly linked with replacing Ralf Rangnick at Old Trafford and The Mirror claims he is already putting plans in plans prior to a potential appointment.

This backs up an exclusive report Stretty News brought readers over a week ago, adding that Van Persie is keen to return and work alongside Ten Hag in order to make United successful again.

Simon Mullock of The Mirror now claims Ten Hag has started informal talks with the former Netherlands striker, who scored 26 goals when United last won the league title under Sir Alex Ferguson in 2013. And the aim for the next appointment will be to bring the team back to those heights.

It would be a popular decision among fans to bring Van Persie back, with Ten Hag recently emerging as the top candidate for the job, which means he has leapfrogged over Paris Saint-Germain’s Mauricio Pochettino.