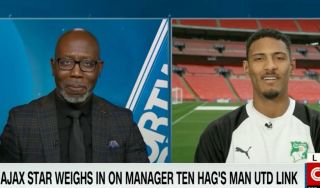 Haller has shown incredible form under Ten Hag this season in the Eredivisie. After struggling in the Premier League at West Ham, the 27-year-old French striker has scored 33 goals in 35 appearances for the Dutch giants.

However, Ten Hag has emerged as the top candidate for the United job, so Haller and co could be playing under a different manager next season.

When discussing Ten Hag’s potential move to England, Haller told CNN: “He’s clever, he knows his strengths but also his weaknesses. I think he’s trying to become better every day, so of course, he’s trying to be there for the players, trying to keep everyone involved in the team.

🗣”I just hope he takes the best decision for himself. He needs to follow his heart.”

United are also believed to be looking at Mauricio Pochettino, who has had a topsy-turvy season at Paris Saint-Germain.

“I think we all understand,” Haller added on Ten Hag potentially leaving Ajax for United.

“It’s the choice from the coach to choose what he wants. We are just his players.

“I am grateful for what he did for me and I just hope that he will take the best decision for himself. I have nothing to say because I don’t even know everything inside Manchester United and the way they really want him.

“I can just say that he needs to follow his heart, his brain, and take the right decision.”