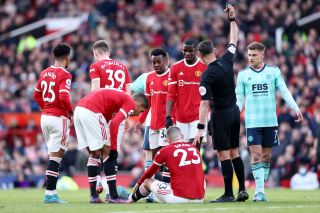 Luke Shaw came off at half-time during Manchester United’s 1-1 draw with Leicester City.

The England international didn’t play particularly well in the first half, but neither did most of his team-mates.

It was another shoddy display from the Red Devils and more injuries is the last thing we need.

Interim manager Ralf Rangnick provided an update on Shaw after the match, saying (via Manchester Evening News): “He had some problems last week, when he was with the England team, with his old injury when he had an operation on a broken leg.

“This showed up again today. That’s the reason why we had to substitute him at half-time.”

Shaw is considered an important member of the first team now, but he has been miles off his best for United this season. I don’t know if that is down to having fans back in stadiums or not, but there is no denying that Shaw played some of his best football for United when the stadiums were empty due to the coronavirus pandemic.

Moreover, Rangnick revealed he could not call upon Jesse Lingard because the midfielder was sick, despite being named on the bench.

“Jesse Lingard couldn’t come on because he was sick,” Rangnick said, as per the Daily Mail.

“He was vomiting before the game. We had all the offensive players we had available on the pitch at the end.”

Meanwhile, Cristiano Ronaldo missed the game due to illness.

It remains to be seen if Shaw will be fit to face Everton next week. Otherwise, it will be Alex Telles at left-back in the starting line-up.