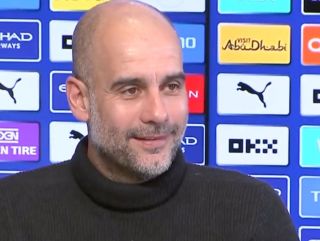 That doesn’t change the fact Pep Guardiola believes the Dutchman could be the right manager to eventually succeed him at Manchester City, even though Ten Hag has emerged as a top candidate for the job at Old Trafford.

Of course, Guardiola knows Ten Hag because they worked together at Bayern Munich for two seasons. In the video below, the City manager described him as “an incredible person”, adding that “his Ajax teams are a joy to watch”.

🗣️"I think he could be the one"

Pep Guardiola on whether Erik ten Hag could succeed him at Manchester City. pic.twitter.com/skPB4KfVG4

Guardiola is in his sixth year at City and his current deal expires at the end of next season. They are on course to challenge for another league title and remain in the Champions League.

He went on to endorse Ten Hag as a strong candidate to take over when he decides to walk away from the Etihad.

“Could Erik ten Hag be here at City? Definitely. I think he could be the one,” Guardiola said. “For the way he approaches the game.”

He went on to joke: “I will say to [director of football] Txiki [Bergiristain] now.”