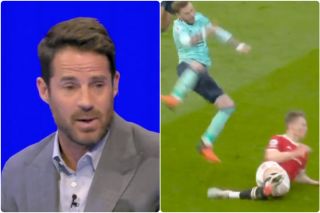 There’s no denying that Scott McTominay was lucky to avoid a red card for a reckless challenge on Leicester City’s James Maddison this weekend.

The Scotland international dived in dangerously with his studs showing in the early stages of the second half.

Maddison rolled around on the turf while his Leicester City team-mates protested.

But referee Andre Marriner only issued a yellow card for the challenge which was described as “reckless” by Jamie Redknapp on Sky Sports.

"It's reckless and out of control" 😡

Jamie Redknapp felt that Scott McTominay was fortunate not to be sent off… pic.twitter.com/KZgPsAIask

United had to come from behind to take a point from the game but it’s not enough gain ground on the top four.

It could’ve got worse had McTominay been sent off.