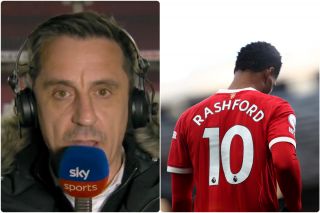 The Red Devils drew the game 1-1 after starting the match without a recognised striker.

Cristiano Ronaldo had to pull out of the game due to illness, which saw Bruno Fernandes start as a false nine, with Paul Pogba in midfield.

It became clear as the game went on that things weren’t going to plan. All of our attacking players were ineffective, while Fernandes was never going to win the ball in the air against Johnny Evans and Wesley Fofana.

Neville also warned United fans that this is going to be a long two months.

“This is going to be a long two months for these Manchester United players and Manchester United fans if they are going to continue to play like that,” Neville said on Sky Sports. “It was really poor out there today and I did not have a clear idea of what they were trying to do.”

🗣 "That was really bad out there today…"@GNev2 says it is going to be a "long two months" for Man Utd if they continue to play as they did against Leicester City 😬 pic.twitter.com/OIRqGnVTiw

He pinpointed a mistake in the starting eleven, too.

Neville felt that Rashford should have started the game rather than coming on in the second half.

“I was struggling with it a little bit before the game without a centre-forward,” he added. “That has killed Marcus Rashford today, that, not playing in that team.

“I know he has been in poor form and lacked confidence, but for Cristiano Ronaldo to pull out this morning and then for Paul Pogba to go in and change the system of play and the way that the game has been approached, and not just put Rashford in as a straight swap when he has trained for the last ten days… I just think there are too many things at this club at this moment in time that are uncertain.”