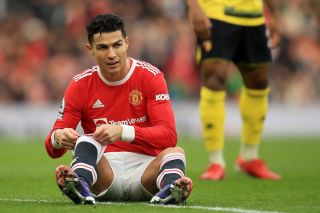 The Red Devils will come into their first game back after the recent international break desperate for a win as they look to maintain pace with top-four favourites Arsenal.

However, interim manager Ralf Rangnick has been forced to juggle his starting 11, which does not include star striker Cristiano Ronaldo.

The world-class forward, who played 180-minutes for Portugal during the latest international break, was not part of Rangnick’s matchday squad who arrived at the Lowry Hotel on Friday night (Manchester Evening News).

In a statement directly from the club, released on their official website, the Red Devils have confirmed that their number seven will be out of action due to suffering from ‘flu-like symptoms’.

Part of the club’s statement read: “The Portugal international has been suffering from ‘flu-like symptoms and, therefore, cannot feature in our first game of the penultimate month of the season.”

United’s intriguing Premier League tie against the Foxes is scheduled to kick off at 5.30 p.m (UK time) and will be broadcast live on Sky Sports.