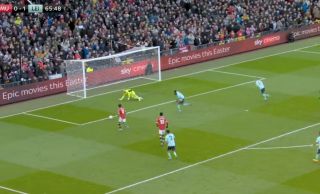 Leicester City’s lead was short lived after Fred leveled proceedings for Manchester United with a well-taken, close-range finish after an initial effort was saved by Kasper Schmeichel.

The Red Devils had an immediate response, despite playing appallingly against Leicester City today.

United went at Brendan Rodgers’ side after falling behind in the match – only for Fred to score from a rebound.

The Brazilian midfielder marched into the box after Bruno Fernandes had his shot saved. He then kicked the ball into the roof of the net to make it 1-1.

Hopefully the lads can find a winner before it’s too late.