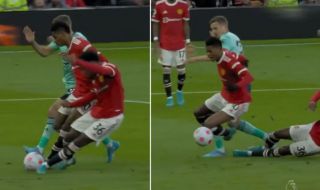 Anthony Elanga accidentally tackled Marcus Rashford inside the box when he was through on goal in stoppage time against Leicester City.

Unfortunately, the game finished 1-1 as United were dealt another blow in their bid to finish in the top four this season. Arsenal can now gain more ground on the Red Devils when they face Crystal Palace on Monday night.

The visitors had a goal ruled out by VAR after a foul on Raphael Varane when James Maddison put the ball in the net.

United had a glorious chance deep in stoppage time when Rashford, who was quiet after coming on from the bench, went through on goal. Then Elanga came from an offside position, only to get in the way to send his team-mate tumbling.

Bruno Fernandes and Jadon Sancho appeared to shout for a penalty, but it is now clear from photographic evidence that Elanga fouled his own team-mate.

The chance itself sums up our season. Falling at every hurdle put in front of us.