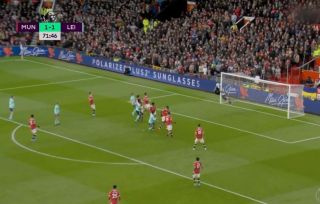 Manchester United goalkeeper David de Gea pulled off a spectacular save to prevent Wesley Fofana from scoring in the second half.

Leicester City won a free-kick and decided to go with a direct ball into the box.

The cross found Fofona who headed towards goal only to force a stunning save by De Gea.

Footage courtesy of the Premier League

It remains 1-1 after Leicester City had a goal ruled out for a foul on Raphael Varane.

But that is not the result we wanted today as it means United lose more ground in the race for top four.

Time is running out for a winner.