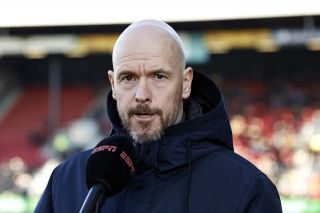 According to a reliable Dutch football journalist, Erik ten Hag has become the ‘top candidate’ to take charge of Manchester United at the end of the season.

Meanwhile, reports suggest Ten Hag has interest from more clubs around Europe after impressing in Amsterdam.

The 52-year-old has already been interviewed by senior figures at Old Trafford and he is by far the most popular candidate among fans.

United were said to be considering Mauricio Pochettino and Luis Enrique, but it looks like Ten Hag is winning the race.

I would be shocked if it wasn’t Ten Hag at this point because it has gone very quiet on the Pochettino front lately. Paris Saint-Germain may want to replace him in the summer, but with who if Zinedine Zidane turns them down?

Stay tuned as Manchester United could make an announcement before the season ends.