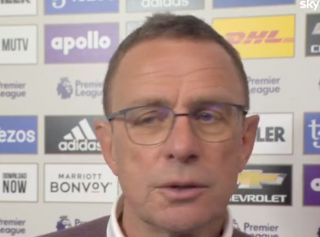 Another result Ralf Rangnick nor his players wanted.

The Red Devils gave up more ground in the race for a top four finish but the manager believes there’s still a chance while it is mathematically possible.

Giving his thoughts on Manchester United’s 1-1 draw against Leicester City, interim manager Ralf Rangnick made it clear that his side did not play well enough in the first-half.

The team never got going and dropped more points against average opposition.

“The second half was the better one, we were struggling to find the rhythm in the first half possibly because of the international break,” Rangnick told Sky Sports.

“We gave away a goal on a transitional moment but the reaction after was good and scored a goal. In the end we are not happy with the result but the second half was OK.

“In the last 15 minutes we tried to score a goal but in this game we did not score the late goal. We don’t have the offensive players and even Jesse Lingard was feeling sick.

“The only one we had was Marcus Rashford. We knew this morning Cristiano could not play and decided to start Paul Pogba. After 60 minutes we made the change and had a central striker on the pitch.

“It is no secret that he was not full of confidence in the last couple of weeks. In training he is looking well but it was a question between Paul and Marcus, we went with Paul.

“As long as it (top four) is possible mathematically, it is possible. It is our job and duty to do our best to finish of the best on the best possible note.”

🗣 "We struggled in the first-half…"

Ralf Rangnick shares his thoughts on Man Utd's draw with Leicester City and #MUFC's hopes of finishing in the top four this season 👇 pic.twitter.com/gNUHtUa0gu