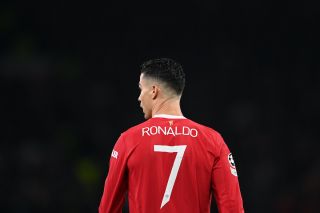 According to the Manchester Evening News, Ronaldo was not seen with the squad at the Lowry Hotel on Friday night.

The Red Devils are back in Premier League action after the international break, and it’s now or never in terms of this team picking up momentum and really pushing for a top four finish.

The MEN state that Ronaldo’s girlfriend Georgina Rodriguez is pregnant, which may be the reason for his absence, but we won’t know until the squad arrives at Old Trafford.

Interim manager Ralf Rangnick did not say if Ronaldo was a doubt for the upcoming match at Friday’s press conference, but it is also possible that the Portuguese star picked up a knock since then.

With Edinson Cavani ruled out yet again with injury, Rangnick won’t have many options up front if Ronaldo is missing. We could even see a front three of Jadon Sancho, Marcus Rashford and Anthony Elanga.

Hopefully it’s just a matter of Ronaldo linking up with his team-mates at Old Trafford.