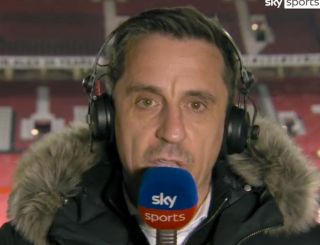 Gary Neville wouldn’t be surprised if Manchester United’s PR machine went into overdrive in the coming days after Saturday’s 1-1 draw at home to Leicester City.

There is a lot of uncertainty over who will be the manager next season. We know that the interview process began a week ago, with Erik ten Hag named as one of the top candidates, but even he won’t know until United come to their final decision.

After Saturday’s disappointing result, Neville reckons United could name their next manager in the coming days, though that would be huge shift from being undecided.

“I suspect after that performance what we’ll see is a PR spike that a manager might be named,” Neville said on Sky Sports after the game.

🗣 "I suspect after that performance what we'll see is that a manager might be named…"@GNev2 feels Man Utd could speed up their process of naming a new permanent manager following the draw with #LCFC 👇 pic.twitter.com/AK1MCp7mwh

It was a tough watch at Old Trafford today.

The players are lacking a sense of direction and nobody knows who will be in charge next season.