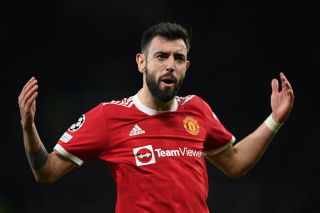 Bruno Fernandes has blamed the media for the ongoing criticism defender and club captain Harry Maguire has received in recent months.

The United skipper, who was on international duty with Gareth Southgate’s England earlier this week, was subjected to boos from Three Lions’ fans inside Wembley Stadium.

Although several senior England internationals have already come out to publicly defend the centre-back, the latest big name to offer his support has been United teammate, Fernandes.

Speaking after the Red Devils’ disappointing 1-1 draw at home against Brendan Rodgers’ Leicester City, the Portuguese midfielder, when asked for his thoughts on the criticism Maguire has received, as quoted by BBC Sport, said: “It’s tough that your own country boos you in a game for the national team. It’s maybe a little bit because of the media. It wasn’t because of his performance – he played really well in that game. Sometimes the media should think a little bit more when they do some things.”

It is hard to argue with Fernandes’ assessment – often a player, particularly one that features so heavily for his country, as well as Manchester United, becomes the scapegoat when performances aren’t going to plan.

Fans, particularly those of United, have seen it time and time again. It is a familiar story but given the mental strength of Maguire, who continues to turn up for the Red Devils, we can probably expect the defender to keep his cool and strive even harder to overcome his critics.