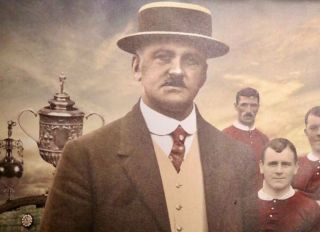 In the glittering, trophy laden history of Manchester United, there is one number that is quite stark: Three.

Three, is of course the number of major trophies United won in the delirious 1998/99 season, and the number of European Cups/Champions League titles won by the club.

It is also, the number of managers who have won a major league title at the club. Two of those will be known to any United fan with even a passing interest in the club’s history, Sir Alex Ferguson, and Sir Matt Busby. Both men were instrumental in building the club into the juggernaut it is today.

The third member of that trio was just as vital to not only the on-field success, but an integral, life-giving part to the body of the club’s history and very being, James Ernest Mangnall.

Mangnall was born in the Belmont area of Bolton in 1866 to Joseph and Anne Mangnall. He had an unremarkable career as an amateur, playing as a goalkeeper for the Lancashire County Football team.

Bolton was a boomtown during the latter half of the nineteenth century and up to the First World War. At the turn of the 20th century, the city had a population larger than what it holds today and was one of the centres of cotton production in the world, supported by a first-rate canal system and coal mines in the surrounding areas. This industrial powerhouse with the backdrop of a growing labour movement brewing and international unrest, were exactly the kind of fires to forge a great figure like Mangnall.

After a directorship at his beloved Bolton Wanderers and a three-year stint managing Burnley, Mangnall arrived at United in 1903 as manager, or “club secretary” as it was called then.

What he found was an organisation in flux, struggling to find an identity. Only the year prior, Manchester United had changed their name from Newton Heath after being saved from bankruptcy by a consortium of local businessmen. The club were in the old Second Division at the time, and it became imperative that the club stabilised and became successful to represent one of the World’s great industrial centres.

Mangnall was utterly transformative for the club, restructuring and modernising the club from top-to-bottom. He was a charismatic showman, who knew how to play the media and raise the club’s profile, by taking the club on lucrative tours of Europe. Behind the scenes, he developed a comprehensive scouting network and stole a march on his contemporaries in championing physical fitness, conditioning, and motivational man-management.

After gaining promotion back to the First Division in 1906, United became one of the dominant teams in English football, breaking the stranglehold of Sunderland and Aston Villa on English football before the outbreak of World War One. United won their first two First Division titles and the FA Cup between 1908-1911 and Mangnall oversaw the recruitment of many of the great players of the age such as Sandy Turnbull, Herbert Burgess, and the legendary Billy Meredith. If that wasn’t enough, he was key in helping to oversee the move to the club’s current home, Old Trafford, its 80,000-crowd capacity, cementing United as the “glamour” club of English Football.

In 1912, United’s first Golden Age ended when Mangnall fell out with the club’s owners over a lack of investment in rebuilding the first team squad, and left to join local foes, Manchester City.

City also owes a debt to Mangnall, as he was instrumental to the club moving to Maine Road in 1923 and taking them to their first FA Cup Final since 1904 before leaving the club in 1924. To date, he is the only man to have ever managed on both sides of the Manchester divide, a truly unique figure in Mancunian football.

It is hard to truly grasp for most of us now, just how important Mangnall was to the foundations of Manchester United. Before him, United were a provincial team without a trophy to their honours list, after his departure in 1912, United wouldn’t win another major trophy until 1948’s FA Cup, under Busby.

Yes, the money of local businessmen no doubt gave United the financial means to grow, but it took Mangnall’s extraordinary personality and vision to galvanise the club give it the platform for the likes of Busby and Ferguson to build on over the course of the 20th century.

Without Mangnall, the path United took, would be unrecognisable to the club we know today.