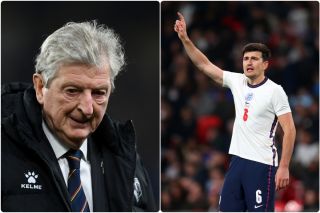 The Three Lions won 3-0 in a friendly against Ivory Coast on Tuesday night, but Maguire was booed before and during the match. He managed to play well and keep a clean sheet, although the booing continued throughout the night at Wembley.

Gareth Southgate hit out at the England fans who booed Maguire, one of their best servants in recent years, while Jordan Henderson defended his team-mate after the game.

Meanwhile, Brandon Williams’ agent Rob Segal has written an exclusive column for Caught Offside this week, including an explanation as to why he believes Maguire was booed by England fans. Segal ultimately sides with the England fans but would he have the same opinion if Maguire was his client?

Speaking in his pre-match press conference before Watford’s trip to Liverpool, Hodgson was asked to comment on Maguire and England’s boo-boys.

He said (via Manchester Evening News): “I don’t understand it. I don’t understand where the impetus for that comes from, I don’t know what the fans are reading or what they are being encouraged to do but it strikes me as being virtually beyond any comprehension.

“But maybe you will tell me something that has been going on with Harry Maguire that I have missed because I don’t follow every single thing that is being said or written so maybe I am being naive. But if having seen nothing to warrant any criticism of Maguire, other than the fact that the Manchester United fans are unhappy that their team is losing, in which case I would have to tell all fans to grow up because if you want to support football sometimes your team is going to win and sometimes they are going to lose.”