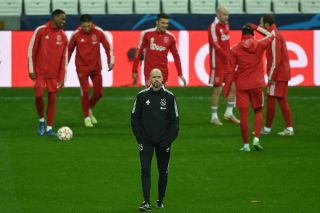 Ten Hag was interviewed last week as United continued their search for a new permanent manager.

The 52-year-old has done a remarkable job at Ajax and looks likely to be the main contender for the job, alongside Paris Saint-Germain boss Mauricio Pochettino.

When asked if Ten Hag is ready for a big job like United, De Boer told talkSPORT: “I think yes.

“I think he’s had four years at Ajax and has the experience. He had a small club at Go Ahead Eagles and got them to the Eredivisie.

“He then went to Utrecht and was a mid-table team and went to Bayern Munich [second team].

“Is he ready and the right moment to move? Yes, he’s capable enough and experienced enough to make the step.”

De Boer added some more insight into Ten Hag’s coaching, even comparing him to Pep Guardiola: “I played with him at Twente and then he went to move as a coach later to Bayern Munich second team.

“He was working a little bit in the shadow of Pep Guardiola at the time. We call him the ‘little Pep’ as he’s so addicted, determined and has a work ethic like crazy for football.

“He analyses and is really technical. He’s very into 24 hours to make sure everything is ready for when the game starts.

“In my eyes, he is a very modern coach.”