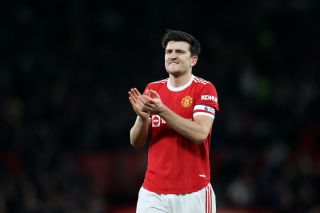 Harry Maguire has been in the headlines again after being booed by England fans.

Gareth Southgate called it “an absolute joke” and he wasn’t wrong.

While Maguire has been subject to criticism for his performances in a United shirt this season, the centre-back has been a brilliant servant to his country. Last summer he was part of Southgate’s squad that reached the Euro 2020 final – but they eventually lost to Italy, who suffered heartbreak in the World Cup qualifiers last week.

It was Ralf Rangnick’s turn to address the boos at his press conference this afternoon.

He told reporters (via Manchester Evening News) that Maguire won’t be treated in the same manner by the Old Trafford faithful: “I didn’t understand what happened at Wembley, it won’t happen in our stadium with the Red Army. He’s been playing well for Manchester United and England in the last couple of years. Gareth Southgate said something after the game and Harry Kane. I didn’t watch the game but I heard what had happened after they announced the starting line-up. Difficult to understand.”

I read this as a clear message to United fans who will attending tomorrow’s game against Maguire’s former club Leicester City. He added: “I don’t speak to them in person but I’m pretty sure it won’t happen in our stadium. For it to happen in an international game is unusual.”

When asked why Maguire has become such a target, Rangnick put it down to the expectations on United and how some people compare today’s players to club legends.

“I don’t think this is a personal thing, it hasn’t anything to do with Harry himself, we know there are one or two players who have been criticised in the last few months, for example, Fred, a very important player for this team, playing regularly for the team and Brazil, I watched his game and he did well.

“Maybe it’s still got to do with the high expectations around this club and people tend to compare with former players and legends. Fred, Scotty and Harry are important players and players with the right attitude.”