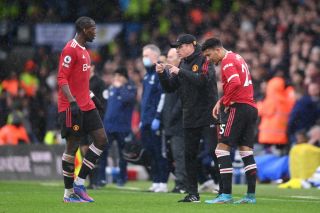 Ralf Rangnick says Paul Pogba must learn to play in the position the team demands of him.

The Frenchman complained about being unsure of his role at Manchester United while on international duty.

Pogba said in an interview that he was not satisfied with his career at United, explaining that it was hard to find consistency when he’s had to switch positions so many times. He drew comparison to the France national team because that’s where he has a set role under Didier Deschamps.

However, Rangnick has urged Pogba to put the team first by carrying out the roles required to help his side earn better results between now and the end of the season.

“I heard he said he had played in different positions in the last couple of weeks,” Rangnick told reporters ahead of United’s Premier League meeting with Leicester City, as per the Manchester Evening News.

“Since that game against West Ham on January 22, we have lost three strikers – Anthony Martial, Mason Greenwood and Edinson Cavani, who is injured again and will be out for the next couple of weeks.

“With Bruno (Fernandes) or Scott McTominay missing, then of course somebody has to play a different role. He (Pogba) is a flexible player who can play (as a number) six, eight, and even 10. This is normal.”

The future is very much in Pogba’s hands as he continues to run down his contract at United.

Pogba will be free to join whoever he wants in the summer, with Real Madrid, Juventus and Paris Saint-Germain believed to be interested in his signature.

However, a player aged 28 shouldn’t need to be reminded to put the team first.

Pogba has only ever worried about himself and that is why he never became the player everyone expected at Old Trafford.