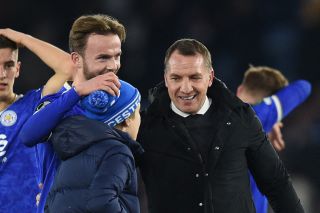 Manchester United will be looking to keep their top four hopes alive when they take on Leicester City in the Premier League on Saturday evening.

The Reds go into the game on the back of a bitterly disappointing 1-0 defeat to Atletico Madrid in the Champions League, whilst the visitors ran out 2-1 winners over Brentford in the Premier League.

Cristiano Ronaldo is widely expected to lead the attack against the Foxes, however, Edinson Cavani will miss the clash having suffered a calf injury on international duty.

Out of all the cup competitions and with the Premier League title long gone, finishing in the top four remains United’s only way of salvaging this season. It has been a bitterly disappointing campaign thus far, particularly with the quality of players we had, but by finishing in the top four and securing Champions League football it would end the season on a high and give the fans much needed hope ahead of next season.

Leicester have underachieved this season too.

Having competed for the European spots in previous years, the Foxes have been well off the pace this time round and currently find themselves sitting mid-table in 10th – and make no mistake, this is a game United should be taking all three points from.

The defeat to Atletico Madrid is still in the minds of many and I would not be surprised if United take out their frustration and really hammer Leicester here. We have missed far too many chances in games this season and haven’t really beat anyone convincingly at Old Trafford, but I think on Saturday that could change.

Leicester aren’t the strongest defensively either and with Ronaldo in form as well as Sancho, Fernandes and co all likely to start, you wouldn’t be surprised if United really take it to Leicester here and win the match comfortably.