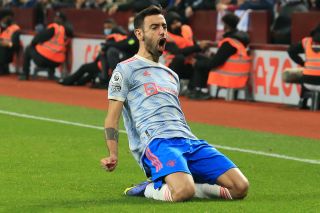 Manchester United fans have taken to Twitter to express their feelings after the club announced that Bruno Fernandes has been given a new, long-term contract.

The Portugal star has contributed 49 goals and 39 assists in just 117 games since joining United in January 2020.

Fernandes has not been as prolific this season, but he remains one of the key players. It will be interesting to see if his form picks up next season under a new manager.

Anyone complaining about this simply ain’t a united fan pic.twitter.com/7hZooUOUN9

The only saving grace in an utterly miserable season

They will count this as a significant signing no doubt, so expect the glazers to less in the sumer.

Our best player since 2020, prove me wrong 🇵🇹 pic.twitter.com/9zFh4jixue

Best player in the squad. People on twitter need to put respect on his name. He contributes more than anybody. And if you honestly say warra trophy or something like that, you literally have no clue about football

Give him the armband with the new contract. ♥️ @B_Fernandes8