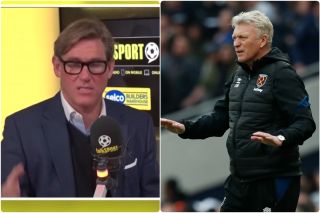 David Moyes has become part of the conversation… on talkSPORT at least!

Simon Jordan, who many of you will know as the former Crystal Palace chairman, has suggested that West Ham manager David Moyes should be considered for a return to Old Trafford.

What a terrible decision that would be – to reappoint a manager, who failed at the club, to a point he had to be sacked just 10 months after getting the job in 2013.

Speaking to talkSPORT, Jordan said: “Everybody with half a brain in football knew that was a poisoned chalice. Everybody knew that the next cab off the rank, it was just an impossible situation.”

Replacing Sir Alex Ferguson was made harder by the fact the club didn’t have much time to replace the greater manager they’ve ever had following over two decades worth of service.

It seems an impossible task now in hindsight but Moyes wasn’t the best fit for the club. Is Jordan arguing that there was no manager in world football in 2013 that could have brought success post-Ferguson?

I don’t agree with that.

Of course, it was never going to be an easy task, but we foolishly appointed a manager with no track record at the top.

Jordan has suggested now could be the time for Moyes to return to Manchester.

“So that means this would be the perfect time for David Moyes to potentially go back to Manchester United,” he added.

Moyes had inconsistent runs at multiple clubs after getting the sack at Old Trafford.

But after returning to West Ham, he has delivered European football.

That is still not enough to convince me that appointing Moyes is a good idea.