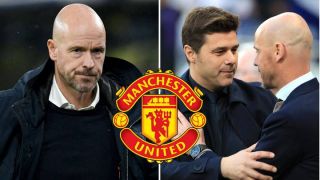 Manchester United are looking to hire a new manager at the end of the season and we’ve all seen the names linked with the job, but can the club finally find the right man to help lead the team to success or is the club doomed until the Glazers sell up?

The Glazer family has held United back on the pitch for years for their commercial gain, and we no longer have the greatest manager of all-time, Sir Alex Ferguson, pulling the strings and ensuring that his players delivered the biggest titles a football fan could ask for.

Erik ten Hag is now the odds-on favourite to become the next manager of Manchester United. The Dutchman shortened in the market after impressing United chiefs during an interview this week, and there are lots of people believing that he will leave Ajax for Old Trafford. Always check for the best odds on these websites where you don’t need any casino bonuses such as no deposit free spins, if you want to take your seat away from the football market.

One current player who will be hoping to see Ten Hag get the job is Donny van de Beek, who hasn’t provided his critics wrong since joining Everton on loan, but his former manager may be the last hope for salvation.

Ten Hag managed Van de Beek at Ajax oversaw his transfer to Manchester United. Speaking to Voetball International in 2020, the leading managerial candidate at Old Trafford talked up the midfielder’s qualities and said he would be missed.

“He is an absolute key player for us, a very modern midfielder with lots of depth in his play. It’s clear that we will miss him a lot once he’s gone.”

The next favourite for the United job is Mauricio Pochettino, who recently dropped a hint over his future after suggesting he has unfinished business with Paris Saint-Germain. The 50-year-old joined the Ligue 1 side in 2021 after his sacking by Tottenham Hotspur in 2019.

There has been a lot of speculation over Pochettino’s future following PSG’s exit from the Champions League and with United likely to appoint a new manager in the coming weeks, the Argentine believes it is in the hands of his current club and not himself.

“We are competitive by nature,” Pochettino said. “This kind of challenge is an exciting one to take on. To give the possibility to fight again for this [Champions League] title, it’s exciting.

“Beyond the sadness, to give PSG the possibility to fight to fulfil their objectives is always a great challenge. And yes, we feel capable of it. Afterwards, it’s a question of exchanges. We will have to sit down with the club to exchange. To find the best formula. To see the vision, the future, the ideas, the project.