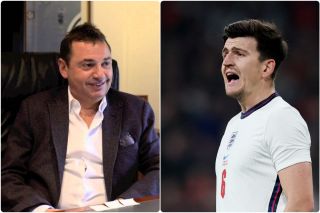 Harry Maguire was booed by England fans earlier this week.

A significant number of fans at Wembley voiced their frustrations with Maguire before the match and at times during the match when he touched the ball. The jeers were loud, and it ensured that Maguire dominated the headlines for days to follow.

“I think he got booed because fans realise that if you’re not playing well, you shouldn’t be playing for England and just because you play for Manchester United shouldn’t automatically entitle you to a cap,” said Segal in his column.

Meanwhile, Gareth Southgate was appalled by the reaction and fellow England international Jordan Henderson took to social media to defend Maguire, who has been a brilliant servant to Southgate’s England side down the years.

“Maguire has played poorly all season,” Segal adds. “He’s always played well for England but I thought the checklist was that you had to play well for your club because being called up to represent your country but that appears not to be the case if you’re Harry Maguire.

“He never seems to take the game by the scruff of the neck, so why did he get booed? – Well, I honestly think fans are fed up with averaging players keeping their place in the team.”

We recently wrote about the hate culture at Old Trafford and how it doesn’t help players overcome difficult periods, so hopefully the United faithful get behind Maguire on Saturday when we take on his former club Leicester City.

Segal’s response definitely sides with England’s boo-boys. His view would probably be different if Maguire was one of his clients because he fails to mention that Maguire played well against Ivory Coast and kept a clean sheet in a 3-0 win.

England fans booing Maguire, who plays well for England and not United, still doesn’t make any sense despite Segal’s attempt at an explanation.

Maguire was booed because he plays for United and it’s currently easy to point the stick at him.