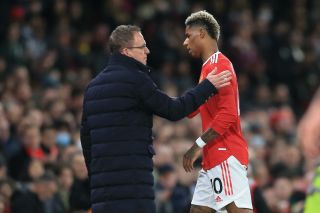 The Premier League’s decision to allow managers to make five substitutions from next season will benefit teams with big squads like Manchester United.

It should benefit some of our fringe players especially. Well, those who remain beyond the transfer window.

“Clubs agreed to change the rules relating to substitute players. From next season, clubs will be permitted to use five substitutions, to be made on three occasions during a match, with an additional opportunity at half-time. A total of nine substitutes can be named on the team sheet.”

Ralf Rangnick has called for the rule change in the past so today’s announcement will be much to the delight of the German, although it won’t come into effect until next season and his time in charge of the team is coming to an end. Rangnick will then move into an advisory role.

In other competitions this season, five substitutions have been allowed and it never made sense that the Premier League was different.

Clubs in the top-flight were able to use five substitutions when the Premier League returned in May 2020 following a break due to the coronavirus pandemic.

Unfortunately, the Premier League decided against keeping the rule in place for this season when it came to a vote.