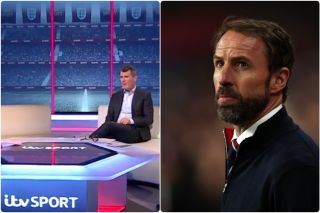 Roy Keane feels Gareth Southgate made a mountain from a molehill on Wednesday night when he slammed fans at Wembley for booing Harry Maguire.

The former Manchester United and Republic of Ireland captain spoke after the game on ITV, as seen in the video clip below, and criticised Southgate for not ignoring the “idiots” in the crowd.

Maguire was booed before the match and at various stages during it too.

While Southgate reacted angrily to the boos, Liverpool skipper Jordan Henderson jumped to Maguire’s defence with a social media post.

Keane argues that every player gets booed and he thinks Southgate should’ve focused on the fact Maguire had a good game and helped keep a clean sheet in England’s 3-0 win over Ivory Coast.

Keane urges Maguire and Southgate to get on with it and focus on the game.

Wright agrees with Keane that fans should be ignored when booing their own players.

What did Roy Keane and @IanWright0 think of the Harry Maguire situation yesterday evening? 🤔#ITVFootball pic.twitter.com/FR8D5rAG3i

It was very unfair to see the home crowd turn on Maguire last night, but it doesn’t surprise me given how England fans have always treated United players poorly.

I don’t think Southgate should be blamed for coming out and defending one of his players.

Luke Shaw spoke recently about the environment Southgate has created in the England camp — how players feel wanted — and the fans went completely against that last night.

Booing your own player is only something an idiot would do.