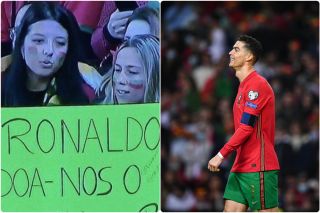 It was a night to remember for Portugal as they qualified for the 2022 World Cup after beating North Macedonia 2-0.

Manchester United playmaker Bruno Fernandes scored both goals, with the first being assisted by club and country team-mate Cristiano Ronaldo.

However, some fans at the Estadio do Dragao wanted to make their feelings known with self-made banners, presumably created in the lead up to Portugal’s crucial play-off match.

This translates to “Ronaldo can you donate yours to us,” with the banner in question clearly showing a drawing of sperm.

It’s the first time we have seen this sort of request at a football match, so you can be sure that it made us giggle this morning when trying to come up with titles for this article. Sadly most of the suggestions had to be binned to protect some of our younger readers.

But judging by the logos on the banner, two women in question are from Portugal and Brazil.

It’s highly doubtful that their pair got what they wanted last night — from Ronaldo at least — but at least Portugal will be going to the World Cup later this year.