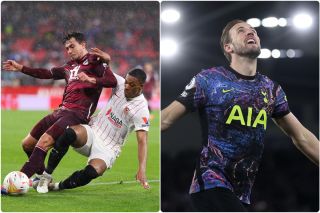 Manchester United are exploring the idea of including Anthony Martial in a deal to facilitate a move for Tottenham Hotspur goalscorer Harry Kane.

According to ESPN, United hope that Martial moving to London would help lower the cost of signing Kane, either in a separate deal or as part of the same agreement.

This comes after The Athletic ran a report this week, highlighting that United want four signings in the summer, including prime target Kane.

I have my doubts about this, and the ESPN report claims Martial would prefer a move to Italy or Spain. He is currently struggling to blossom in a defensive Sevilla side but may still look to leave England, not just Manchester, in the coming months.

Martial is under contract at United until 2024 and I am sure the new manager will have a say on whether he’s part of the long-term plans. He’d want to be crazy to keep him if there was a chance of signing Kane.

Kane turns 29 later this year and he’s had a number of injury problems in the past. Let us know in the comments section if you think he’s a risk worth taking?