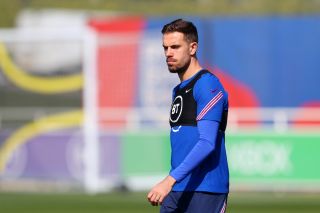 Liverpool captain Jordan Henderson has come out in defence of his England team-mate Harry Maguire after the Manchester United defender was booed by his own fans at Wembley on Tuesday night.

Maguire’s name was booed by a significant section of the Wembley crowd before the friendly game with Ivory Coast. He was also booed at various times throughout the match too.

The 29-year-old helped England keep a clean sheet, as they won the game 3-0.

But why were the England boo-boys out to get Maguire?

At club level, Maguire has endured a difficult campaign for United and his form has been subject to heavy criticism, even by his own fans.

However, the United skipper has typically performed well for England and he’s been a regular under Gareth Southgate, who offered a strong defence of the defender after the match.

Jordan Henderson shared his own statement on social media about Maguire.

“I can’t get my head around what happened at Wembley tonight,” said the Liverpool midfielder. “Harry Maguire has been a colossus for England. Without him, the progress made at the last two tournaments would not have been possible.

“To be booed at his home stadium, for no reason? What have we become? What happened tonight was just wrong. As someone who wants to win with England, I feel fortunate to share a dressing room with him. We all feel the same!”