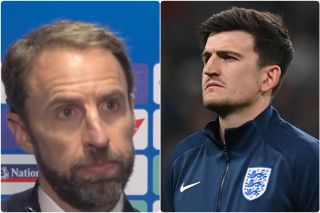 Gareth Southgate says it is “an absolute joke” that Harry Maguire was booed by a significant section of England fans before their game against Ivory Coast on Tuesday night.

England won the friendly match 3-0 but Southgate focused on the reception Maguire received.

The Manchester United defender has struggled for his club this season but that doesn’t explain why he would be booed in an English shirt.

England fans always turn on United players because a lot of them are ABUs (Anyone But United).

Southgate did not understand these jeers as Maguire has been a good servant to his England side down the years.

“I thought the reception was a joke, an absolute joke. The way he has performed for us has been absolutely phenomenal. I don’t get it. We’re either all in this together or we’re not,” Southgate said (quotes via BBC Sport).

Harry Maguire has never let #eng down. He was even voted in the UEFA Euro 2020 Team of the Tournament last summer. Important to note that boos didn’t emanate from sections housing #eng most loyal, home-and-away fans. https://t.co/rb9EEc6tND

“He’s in an England shirt and not only should you support a player in an England shirt regardless, but when you’ve played at the level he has for us and put the performances in he has, it should be total commitment behind him. I don’t get it at all.
“His performance was pretty faultless really. He stepped out from the back really well for his first goal, was involved in the second one too. So, yeah. The team are totally united. We recognise everyone has difficult moments but he’s a top player and he will come through it.

“They are real England fans and some are influenced by whatever – social media or players that played previously who are influencing opinion. The club situation is obviously very difficult but he’s in an England shirt. A remember decades ago a few players being booed in an England shirt and it’s never been acceptable to me. Fans should always get behind their team.”