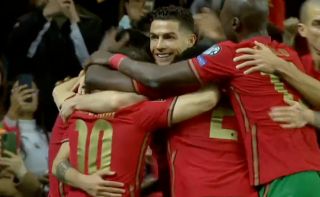 Portugal take the lead in their World Cup play-off with North Macedonia.

After giving up possession cheaply in their own half, North Macedonia found themselves in an awful position as Manchester United duo Cristiano Ronaldo and Bruno Fernandes ran at goal.

Fernandes stuck out his leg to intercept Stefan Ristovski’s wayward pass. The ball then breaks to Ronaldo, who draws the only nearby defender and flicks the ball through his legs and back to his United team-mate.

The Portuguese Magnifico strides towards the box and lashes a shot into the bottom left.

GOAL PORTUGAL! Bruno Fernandes gives the hosts the lead on North Macedonia with a ticket to the World Cup on the line

North Macedonia had been doing so well up until Ristovski’s sloppy error.

Portugal currently lead 1-0 at half-time thanks to Fernandes’ opener.