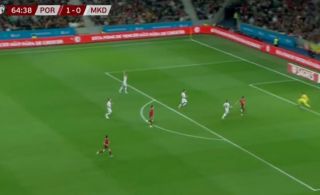 Portugal have qualified for the World Cup after beating North Macedonia 2-0 at the Estadio do Dragao.

Bruno Fernandes scored the two goals that booked Portugal’s place at the Qatar World Cup, to be held later this year, and fellow Manchester United team-mate Cristiano Ronaldo helped him with an assist for the opening goal.

However, the United playmaker went on to make it 2-0 as he completed a brace after 65 minutes. This time it was Liverpool’s Diogo Jota with the assist.

Fernandes starts the attack in his own half before getting forward. He is later picked out inside the box before hitting the back of the net.

Bruno Fernandes gets his second of the evening with a brilliant finish as Portugal edge closer and closer to the World Cup 👇pic.twitter.com/mb52A3KoRD

This means that Ronaldo, 37, can look forward to another World Cup later this year.

Fernandes and Diogo Dalot are expected to be part of the squad that travels to the Middle East.