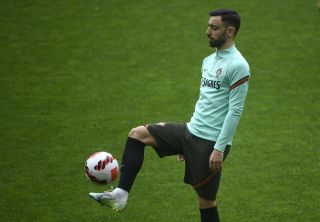 Manchester United have a strong representation for tonight’s World Cup play-off matches, with a place in the finals at stake.

Bruno Fernandes and Cristiano Ronaldo all start for Portugal against North Macedonia, with Diogo Dalot named on the bench. The United trio also started in their 3-1 win over Turkey but tonight they are up against a side that knocked out Euro 2020 champions Italy.

Portugal need a win to advance in the tie at FC Porto’s Estadio de Dragao.

Meanwhile, Sweden are looking to book their place in Qatar after beating Czech Republic 1-0 in extra-time. Victor Lindelof is in the line-up to face Poland, while Anthony Elanga has been named on the bench.

We will be hoping that United have a strong representation at the World Cup and while Portugal are expected to qualify, it will be a real task for Lindelof to keep Poland striker Robert Lewandowski quiet on the night.