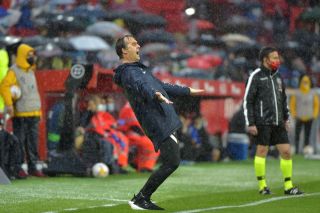 Sevilla coach Julen Lopetegui has ruled himself out of the running for the Manchester United job.

It is believed that Lopetegui has been under consideration to manage United since Ole Gunnar Solskjaer was sacked in November.

However, the Spaniard has said there is ‘no doubt’ he will remain at Sevilla next season.

“The [speculation], I can’t help it,” Lopetegui told El Chiringuito. “I am where I want to be. Continue on the Sevilla bench next season? I have no doubt.”

I have been watching Sevilla closely since Anthony Martial joined them on loan in January, and from those few matches Lopetegui quickly became the manager I didn’t want at Old Trafford next season.

They play a defensive game and were shown up against West Ham in the Europa League. It really is no wonder that Martial has struggled during his stint in La Liga.

Lopetegui’s comments come after Luis Enrique downplayed suggestions that he would leave Spain for United during a World Cup year. This shows that United’s search has been narrowed down to two candidates: Erik ten Hag and Mauricio Pochettino.

The pair have been seen as the main contenders for some time and soon we should know which one will be named the next United manager.