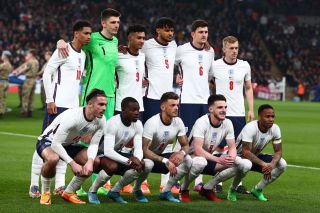 Before the match as each player’s name got called out through the PA system, Harry Maguire was booed by a significant number of England fans in the stadium, as per Independent journalist Miguel Delaney.

I wonder was this what Luke Shaw was referring to when he said he feels more wanted at England.

Harry Maguire booed by a significant number of the Wembley crowd.

This may seem harsh on Maguire who has been good servant to Southgate’s side down the years – helping the Three Lions reach the Euro 2020 final last summer. But his performances for United this season have also been subject to strong criticism.

That doesn’t make it okay to boo a player and we know how England fans like to turn on United players. They did it to David Beckham, Paul Scholes, the Neville brothers and Wayne Rooney in previous years.

Hang on, England fans are booing Maguire because he’s not playing very well for a club they probably don’t like? How does that make any sense at all? Thick as mince

I am far from Maguire’s biggest fan, but I am the type of supporter who believes in getting behind the team, rather than slagging it off before a ball is kicked.

Maguire has been a lot better for England than United, but the centre-back has become an easy target in recent times.

He needs to rediscover his form at club level or United could be tempted to strengthen at the back this summer.